According to material provided by the church, “Saint Rose of Lima Roman Catholic Church was incorporated as a parish in Haddon Heights, New Jersey, on June 1, 1896,” which predates the incorporation of the town by nearly eight years. The church’s first building, placed on land donated by Benjamin A. Lippincott to Saint Rose and other religious organizations in order to encourage growth in the community, was built in 1897 at Kings Highway and Fourth Avenue.

In 1903, Reverend Joseph Egan, the church’s first full-time pastor, organized the purchase of the house and property at Third and Green for use as a rectory. He also purchased property at Fourth and Green, which was where the church was eventually moved. St. Rose Elementary School was built in 1921, later to be joined by a convent and chapel on Green Street. In 1961, the current Saint Rose edifice was built on the site of the original church, Kings Highway and Fourth.

Saint Rose can be found on the web at www.strosenj.com. Thanks to the church for providing the following pictures, as well as a narrative from which the above was taken. 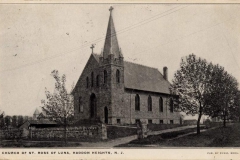