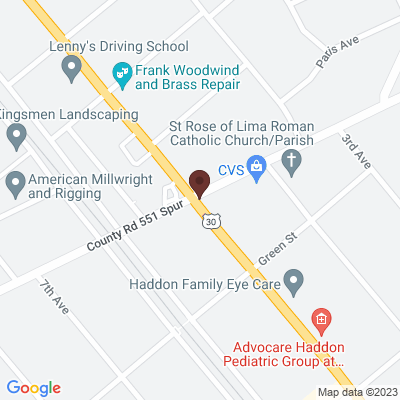 The Albertson Memorial Fountain first stood at this intersection in 1903 when it was presented to Camden County by John J. Albertson in memory of his father, Chalkley Albertson. Practicing Quakers, the Albertsons were descended from William “Alberson” (d.1709), a Dutch immigrant who settled in Newton Township (now in Magnolia) in 1682. Chalkley Albertson served in the State Assembly in 1863, 1864, 1867, and 1873. He helped to establish and incorporate the White Horse Turnpike Company and introduced a bill in the State Assembly to incorporate the Camden and Philadelphia Bridge Company.  He helped initiate the Philadelphia and Atlantic Railroad and was one of the commissioners to arrange for the Centennial Exhibition in Philadelphia. John Jarrett Albertson (1858-1928) was responsible for laying out Haddon Heights, served as Camden County Engineer from 1892 through 1928, and was the Borough Engineer for Audubon, Barrington, Collingwood, Haddon Heights, Magnolia, and Oaklyn.

The six-ton Barre Granite memorial was installed by John as a water trough for horses, the primary source of transportation at the time. It was located at the intersection of north-south Kings Highway, and east-west White Horse Turnpike, about half way between the stagecoach stop at the White Horse Tavern in present-day Stratford and the City of Camden. The tavern provided meals and lodging, and served as the name sake for the White Horse Turnpike when the road was laid out in 1806. Tolls were collected from travelers from 1854 to 1893; one of the toll stations was at this very intersection. Kings Highway was laid out in 1760 as a straightened and more level version of the 1686 “Great Road from Burlington to Salem.” After automobiles came into use, the White Horse Pike became the first paved concrete road in New Jersey in 1922, and was the “longest stretch of hard-surface roadway in the world.”

In 1928 John J. Albertson bequeathed the title to the fountain and the ground on which itstood to the Borough of Haddon Heights. After travel by horses declined, there was no need for the water trough and it was moved in 1938 to the local park at Eighth and High Streets. In 2003 the Consumer Value Stores (CVS) Corporation generously  agreed to return the fountain to this corner plot, in close proximity to its original location, as a permanent monument to Haddon Heights’ rich social history.