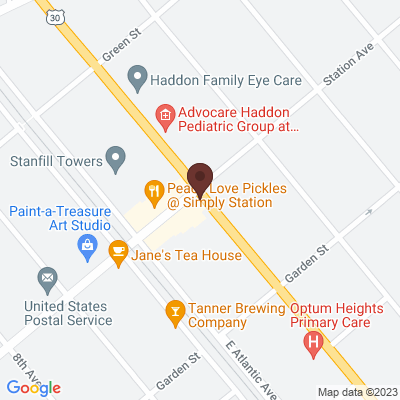 Fifth Avenue, in the original street grid of Haddon Heights, is commonly known as the White Horse Pike.  In 1806, this road was laid out from Camden to Egg Harbor along a line through Berlin (then called Long-A-Coming) and the future Borough of Haddon Heights.  By the late nineteenth century, the Philadelphia and Atlantic City Railway had been laid to the west of White Horse Pike, and local land owners, led by Benjamin A. Lippincott, saw an opportunity for development.

In 1890, a passenger station was built along the railroad tracks at what is now Station Avenue, and the community named Haddon Heights (for its proximity to Haddonfield and its high elevation) began to develop.  A small downtown grew near the railroad tracks:  early buildings included a general store, a meat market, churches, banks, a post office, and a town hall.  The first houses were constructed along the White Horse Pike and on the land surrounding the railroad station.

Beginning at Kings Highway and moving down the Pike towards Barrington, these houses – now mostly rehabilitated for office use – reflect the development of architectural styles during the early twentieth century including:  Queen Anne; Tudor Revival; Colonial Revival; Vernacular American Four Square; and Craftsman Bungalow.  In 1904, Haddon Heights was incorporated as a separate Borough, and continued to develop further from the center of town, with the population reaching almost 10,000 residents by 1960.