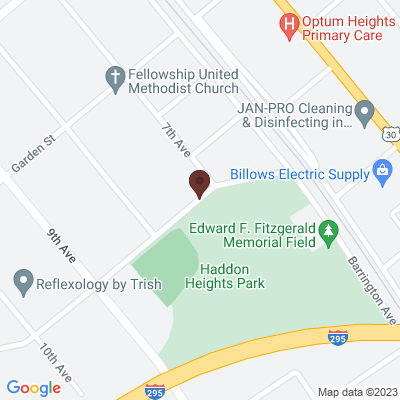 Nearly a thousand boy and girl scouts and visitors assembled in the Haddon Heights municipal park Saturday afternoon to witness the dedication of a log cabin in the woods by borough officials to the scouts of Haddon Heights. Dr. William H. Carney, president of the building of the cabin, presided at the ceremony. Invocation was pronounced by Rev. James R. Kerr, pastor of the Presbyterian Church. A flag-raising playing of “colors” by the drum and bugle corps, and salute to the flag took place under direction of Robert Harmer. The Pledge of Allegiance for the boys was led by Scoutmaster Edwin C. Boyer, and for the girls by Mrs. Edward Raiston Grossman, Girl Scout leader. Mayor William J. Dallas presented a key to the cabin to each of the captains of the various Haddon Heights Boy and Girl Scout troops, impressing on them the importance of the trust being reposed in them, and advising them to use the keys only for opening the cabin to scouts and other properly accredited persons. A troop flag was presented by William Maguire, of the Service Club, and American flags by Mrs. Clinton D. Moon in name of the Mothers’ Council, and Benjamin W. Hoyle, commander of Hoyle-Butcher American Legion Post, in name of the post. They were accepted by Scoutmaster Boyer.

In a short address, Dr. Carney told how the idea of constructing a meeting place for the borough’s scouts had been conceived at a meeting of the Service Club last Fall, and how it was carried out by the generosity of the club members and the co-operation of Haddon Heights’ citizens. “This cabin,” Dr. Carney said, “will stand for many years to come as a monument to the generosity. the public-spiritedness and the spirit of co-operation of the people in this borough. It will be a beacon for the young men and women of the town toward worth-while things in life, toward wholesome recreation, and educational entertainment.” Short talks were given by George M. Guyer, chairman of the scouts’ executive committee, and Mrs. Anna Hall, of the Girl Scouts committee. A parade from the high school to the cabin, included Haddon Heights police, led by Director Burton M. Rogers; the Volunteer Fire Company with apparatus, commanded by Chief Oliver P. Lambert; American Legion Post, led by its commander, Benjamin W. Hoyle, sea scouts from West  Collingswood, and scout troops from Haddon Heights, Oaklyn, Audubon, Gloucester, Runnemede, Barrington, and other South Jersey towns.

Measuring 25 feet in width and 40 in length, the scout cabin is large enough to accommodate all members of the three troops and their friends, with plenty of room for demonstrations and public meetings. The fireplace, which measures 11 feet and six inches across, is built of Jersey red iron stone, discovered and dug by the scouts in the borough park not more than 100 feet from the cabin site. It required 40 tons of the stone to complete the fireplace and the chimney. Standing in the wooded section of the park, the cabin’s location is ideal, and the scouts look forward to the Summer evenings, when they will sit around the campfire and their familiar scout greeting “How! How!” will reverberate among the pines and the elms and the mighty oaks. Not only can the cabin be reached by narrow cinder roads, but also by an old sandy wood road, which brings back to the memories of old residents the time, when the homes of Frederick Fries and the late Benjamin Lippincott were the only houses worth while in the town.